How can we motivate 3k+ users to do reviews?

It has been a little while since our site had been promoted with a new design and thresholds for privileges have been raised alongside.

Now what I have seen is that the "Close votes" review queue has been filling up with at least 10+ up to 40+ close votes awaiting review. Before the site promotion, users of 500+ reputation could vote on close votes, now this has been raised to 3k+ reputation, which means before there were over 300 users that were able to vote and right now there are only 45 users with over 3k+ that can vote.

Some people are even calling upon the Romanian army... 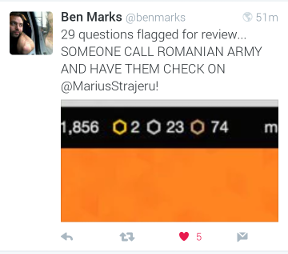 Ok, 10 to 40 queued reviews is nothing compared to the numbers seen on StackOverflow, I know. But if we need the powers of one man to solve this, then I would not call this a community effort.

I thought, ok maybe a lot of those 3k+ users aren't active? (maybe now after this post and the tweets... :P). So I checked, doing some jQuery and Ajax on the users page and that is clearly not the case:

Other than organizing a MageStackDay again (I hope Anna and Sander don't kill me for this) I see no other way.
The StackExchange network already has incentives for this:

If people don't want to contribute you cannot force them.

Agreed with you, I very often run out of close votes. Sometimes I see people like you, Marius, Fabian and myself have already used 20 close votes and I still see a 10+ long review queue.

Can we actually get that info via the data SE ?

We can get some distribution here but not sure if we can get more details than this: https://data.stackexchange.com/magento/query/17934/distribution-of-close-reasons. 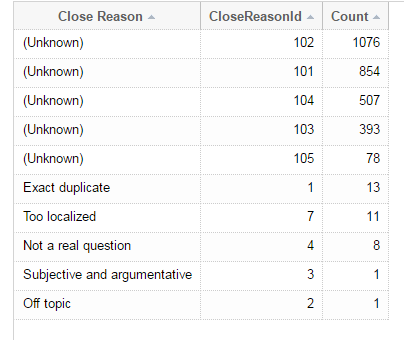 People seem to ignore the fact that questions about 3rd party modules are off-topic, maybe we should find a way to make that clearer I'm not sure.

Ended up finding the data re: close reasons over the last 90 days it's available for 10k users here: https://magento.stackexchange.com/tools/question-close-stats?daterange=last90days

Not the answer you're looking for? Browse other questions tagged discussion voting vote-to-close .

This site is for discussion about Magento Stack Exchange. You must have an account there to participate.

2
How can we avoid spam on magento.stackexchange.com?
2
Community-bot keeps bumping
4
Increase in vandalism of posts
4
How should we handle technical questions from non-technical users?
1
Let's get critical: Sep 2014 Site Self-Evaluation
7
Quality of review process
4
Cannot vote on closing questions anymore until 3k rep
2
Link only answer - with a comment what do you do?
6
(Close) votes not really checked before?
4
Should I remove my question?